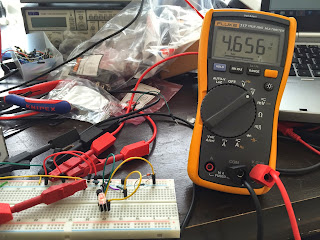 Due to the bank holiday I finally had a bit of spare time today so I decided to try and make a start designing my Lab Frequency Standard.  I say start but in truth I have been researching this for some time.  I even ordered many of the parts so I had everything I would need to build a prototype.

Whilst I was tempted to add all sorts of features such as a LCD display I decided to keep it simple. Below is a list of the feature I felt were essential.
A 24v power supply and the enclosure were easy to find and order online but I opted to prototype the the other parts of the system before designing a PCB.

I decided to start with the status LED circuit, I had originally thought of using a micro controller but in the end I went with a simple transistor based circuit. After a bit of searching I found a project of which part of the design was just what I needed. Luckily I had all the parts so I knocked up a quick prototype and it worked perfectly.

I had originally intended to use a dedicated frequency divider chip to get the 1Hz output but they were a little on the pricey side of things.  After a bit of a search I came across TVB's site where he talks about using PIC microcontrollers to do the same job at a fraction of the price.  You can even order a pre programed PIC from him,  I decided however to opt for programming my own.  This is made much easier by the fact he has published all the HEX on his site.

The only issue currently is I cannot find my old programmer and I have not had much luck getting a cheap one I purchased on eBay to work although I think that might be a windows 8 issue.  Once I have overcome this issue I will get this aspect prototyped as well.
Posted by Unknown at 20:45