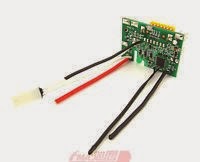 This post is just a quick update.  Its been about eight months since I repaired my first Makita Li-lon batteries.  I have been careful to let repaired batteries to cool down fully before charging and where ever possible not to fully discharge them but so far there have been no failures of any of the repaired ones.

I have however had a couple more batteries fail, as an experiment I sent them to the Makita Service Centre. Even though they were out of warranty, one by a couple of month and one by nearly a year, they sent me replacement within a couple of days at no charge.  I future this will be my first port of call and only if this fails will I attempt to repair them myself.

I do however have several failed battery packs that I had already taken apart with the intention of repair, so are not candidates for sending to Makita.  Due to being unable to source replacement control boards, i had put these to one side and had even concidered using the good cells for another project. Thankfully I once again have a supplier of them who has stock and have ordered several, so will soon be back repairing batteries.
Posted by Unknown at 19:21